How Did The World’s Most Famous Shipwreck Come To Be?

There is no doubt that Navagio Beach (Shipwreck Beach) is one of the most famous and most photographed beaches in Greece. Located on the north-west shore of the Ionian island of Zakynthos (also known as Zante), Navagio Beach, previously known as Agios Giorgos, became an impromptu ship graveyard when the MV Panayiotis washed up on its shores in October 1980.

Many theories and speculations arose and while the date is often wrong (some sources state that the event happened in 1981, 1982 or 1983), most of them claim that the MV Panayiotis was a smuggler ship, hence its contributing to the name Smugglers Cove. Some say that the ship was smuggling cigarettes, wine and even humans, when authorities caught up and cornered it until the cove, where it circled aground. Others, supporting the theory that the vessel was indeed smuggling contraband cigarettes, booze and women, lost engine power and was simply washed ashore in the bay. 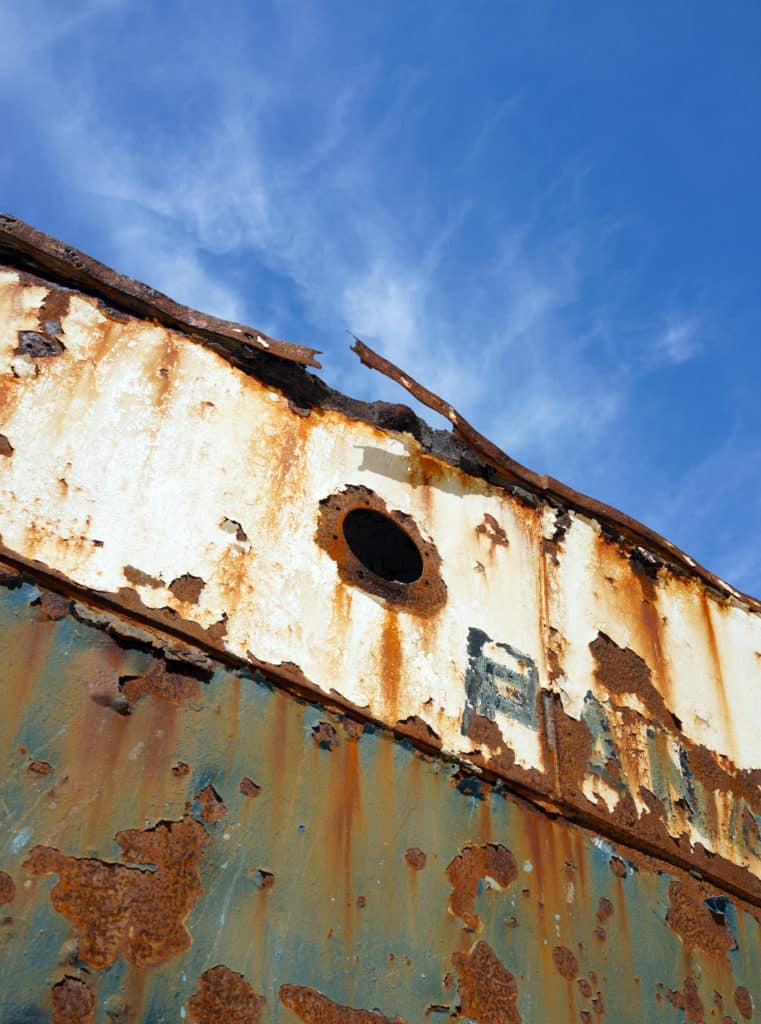 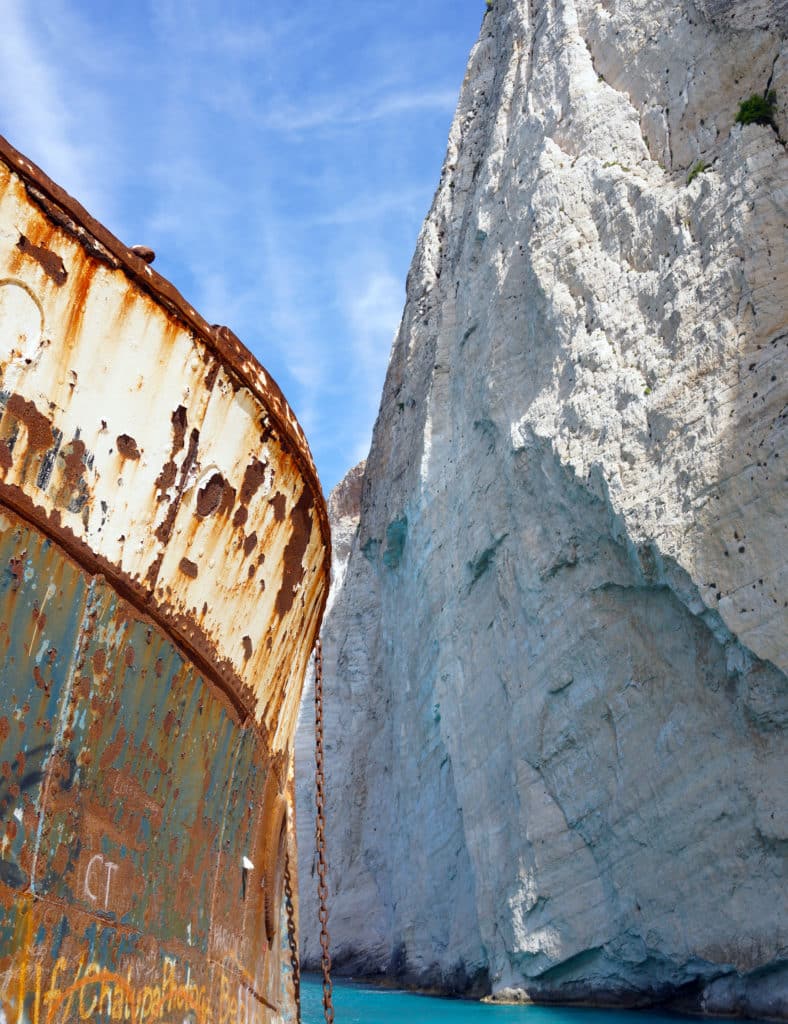 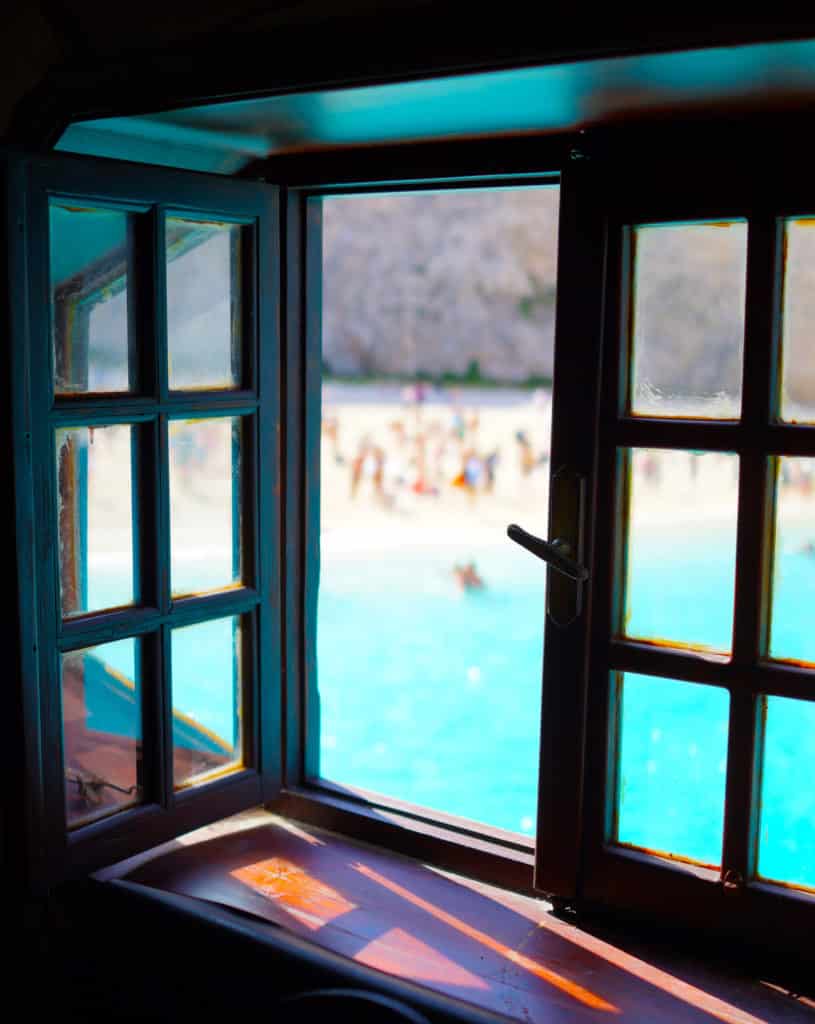 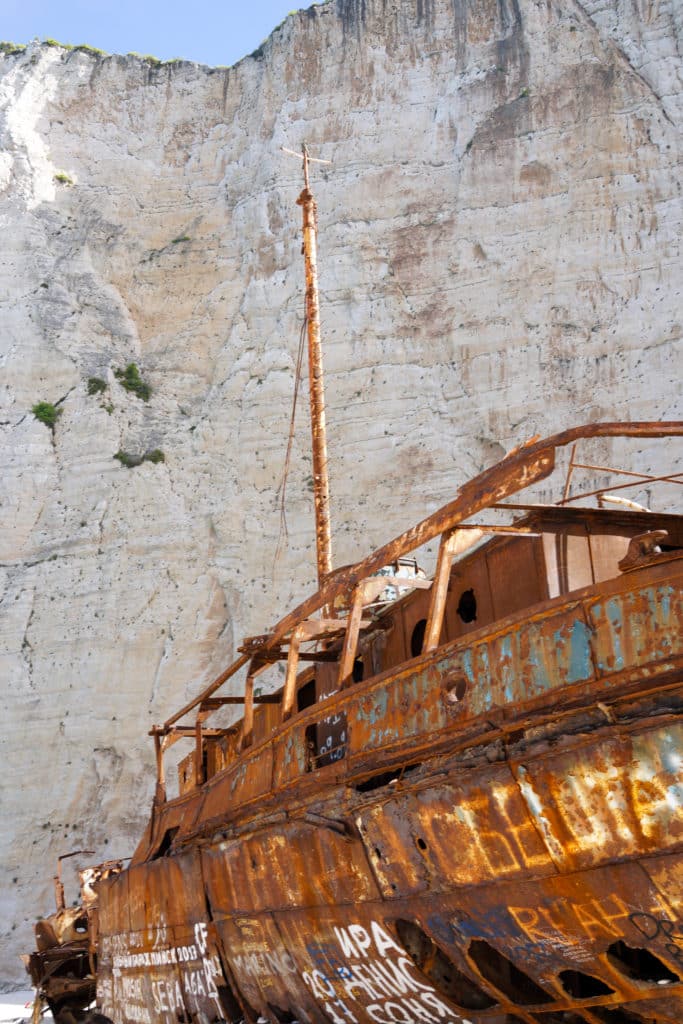 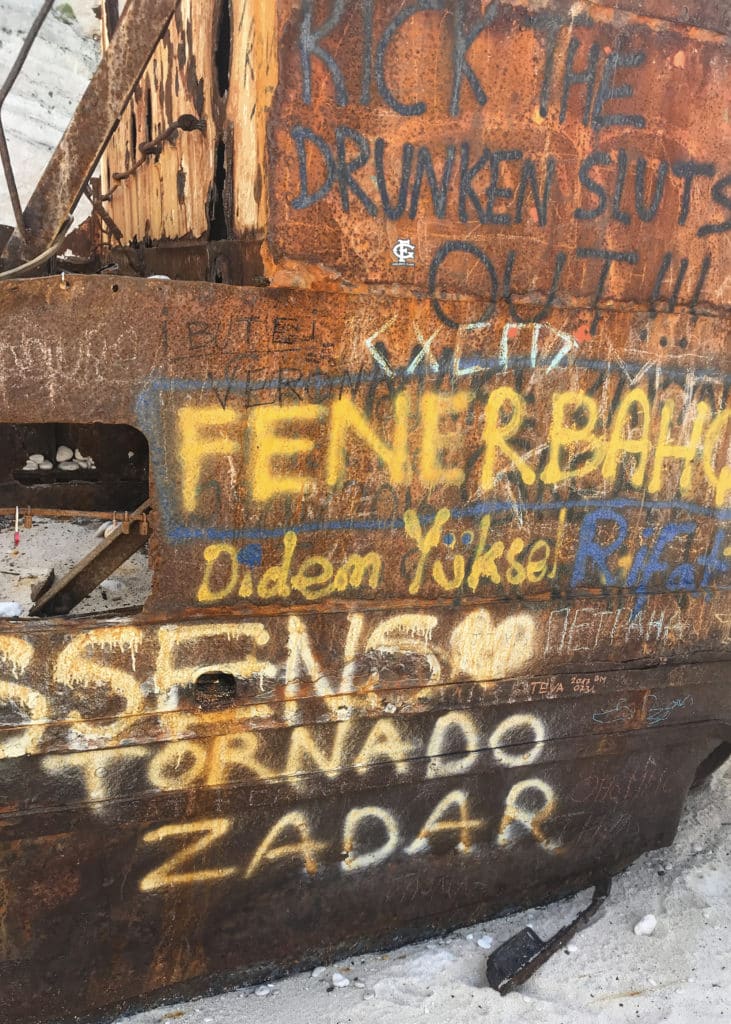 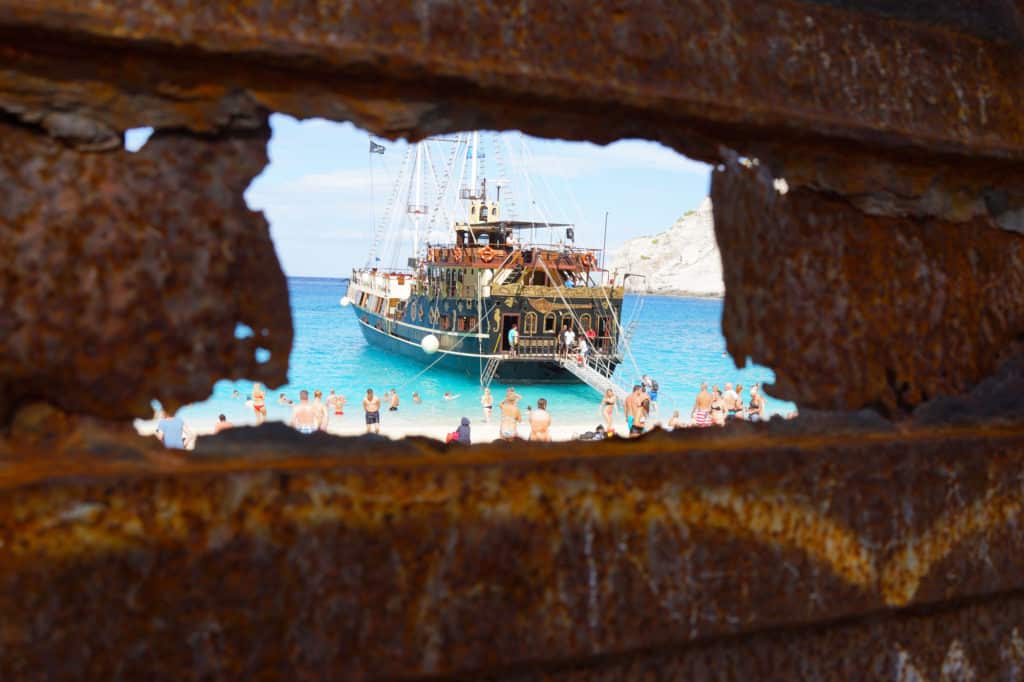 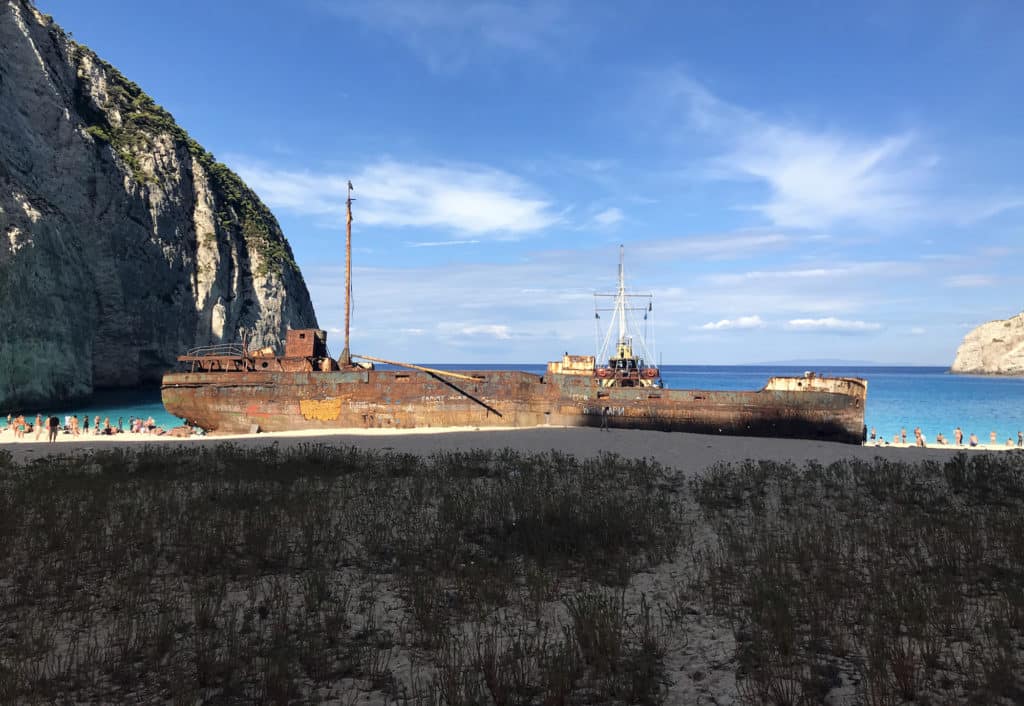 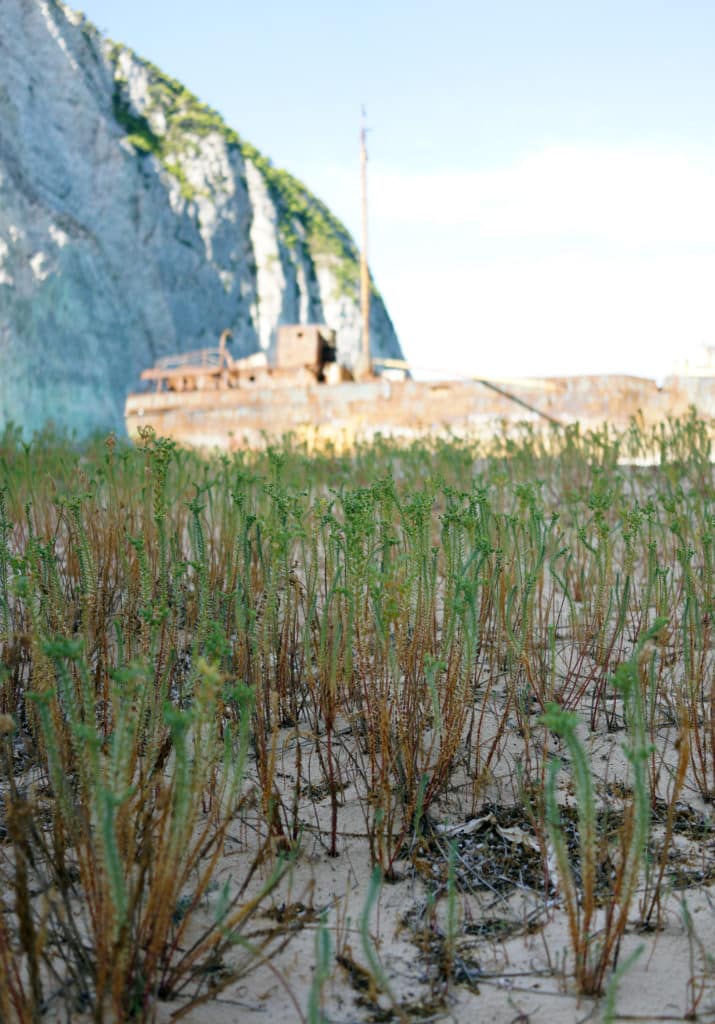 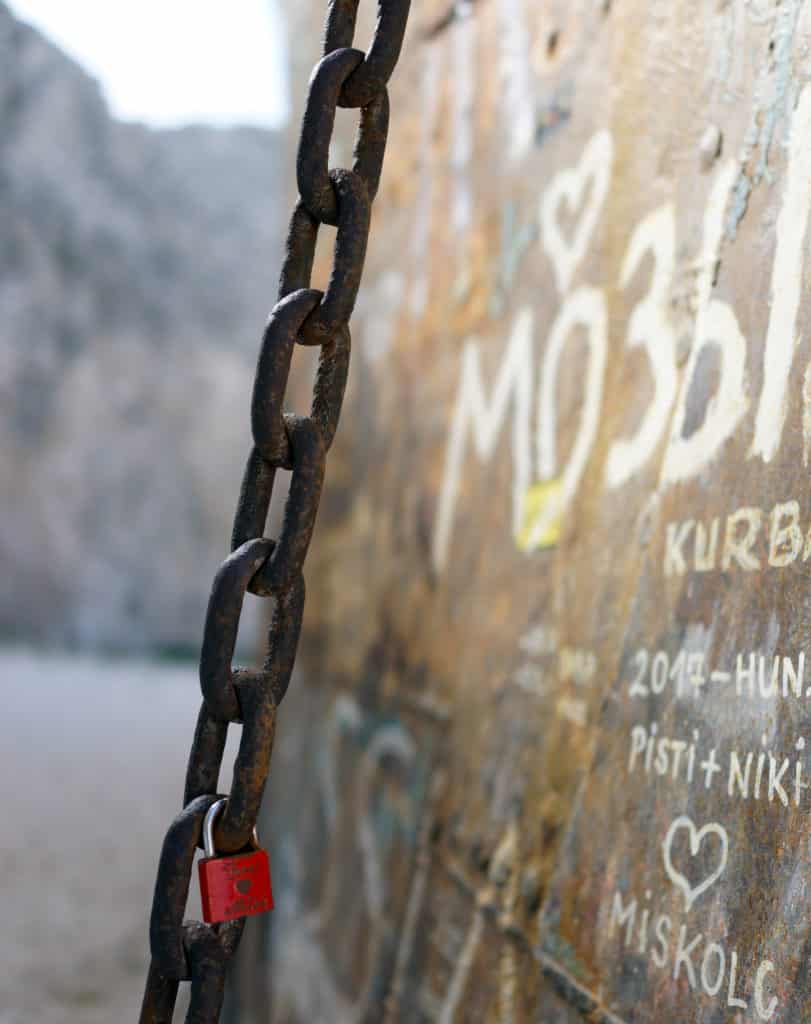 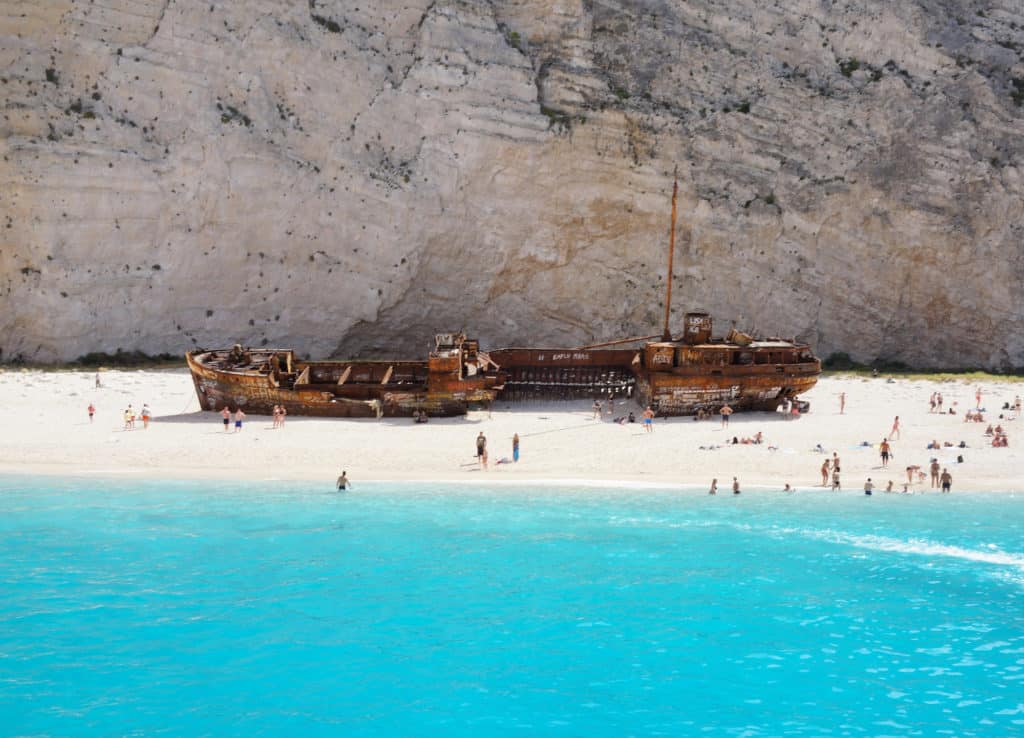 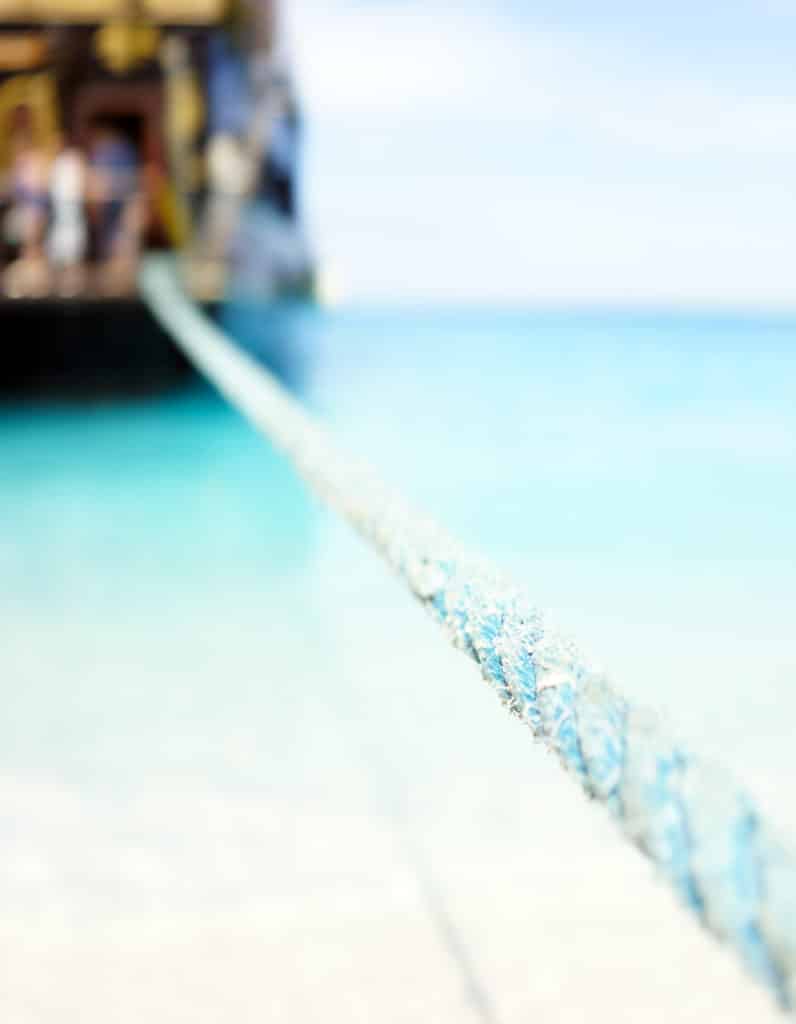 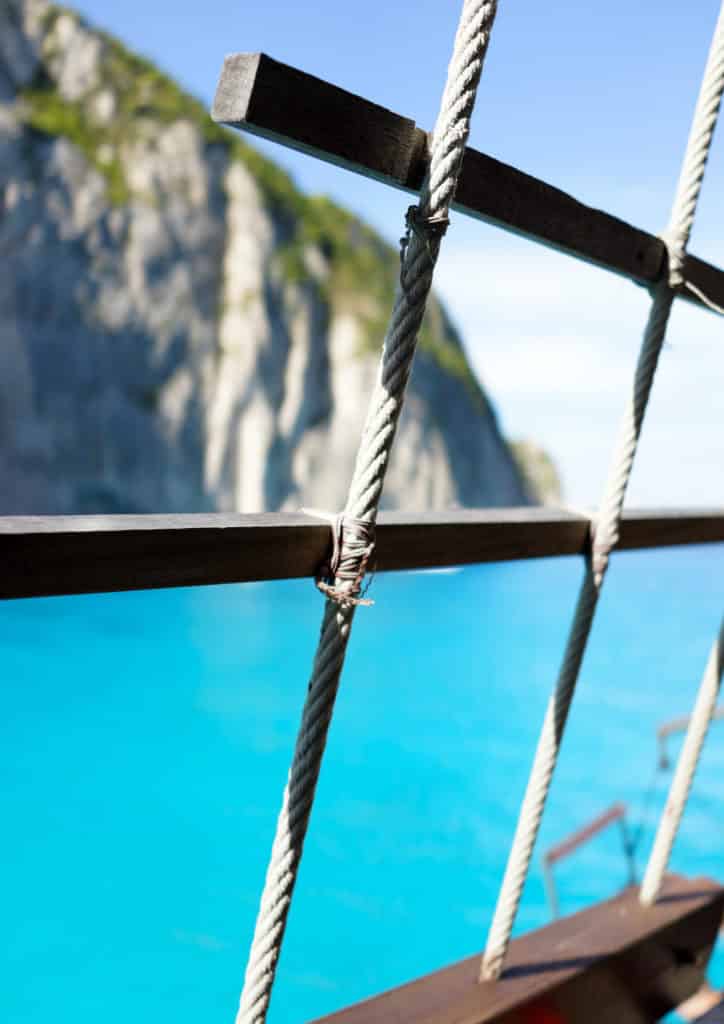 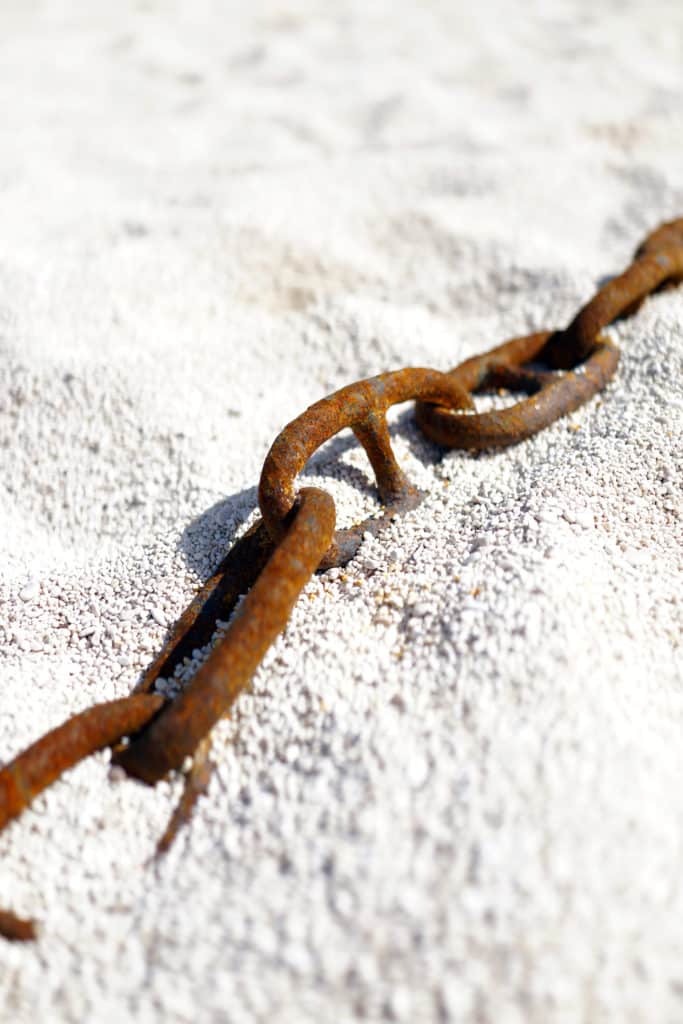 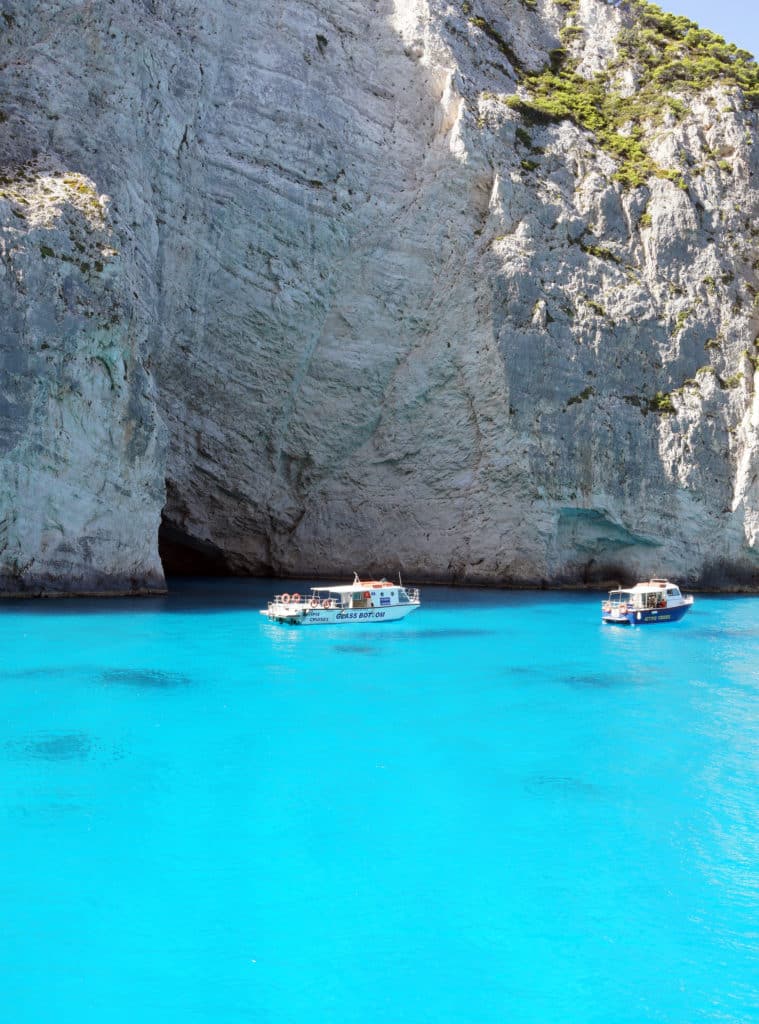 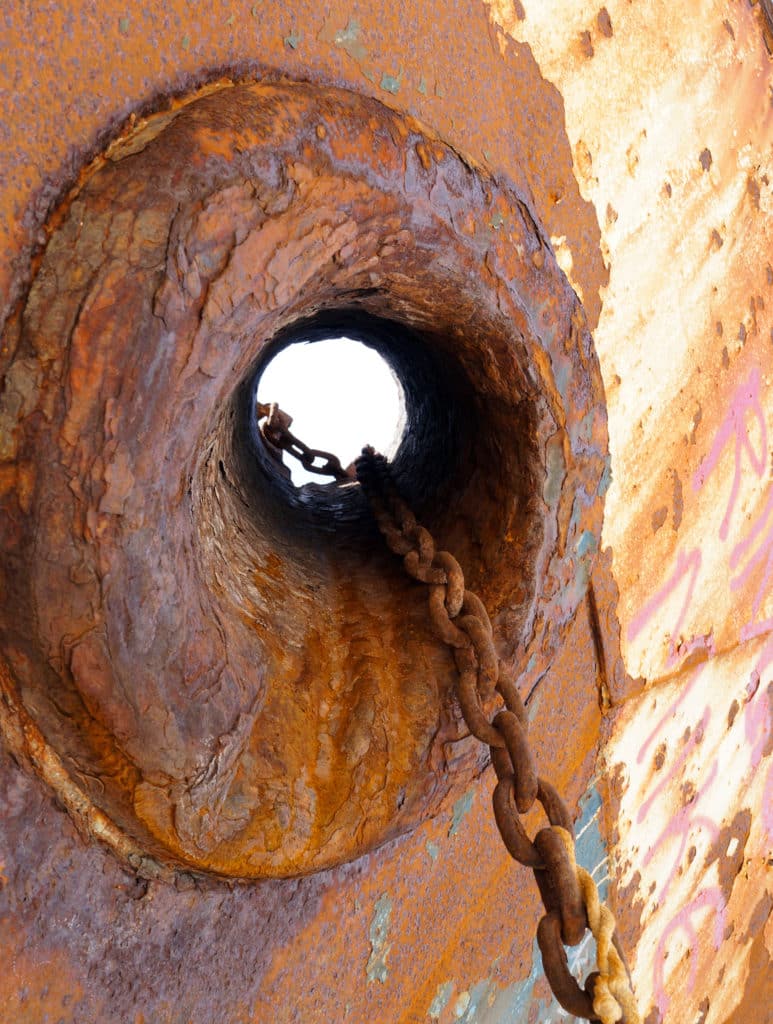 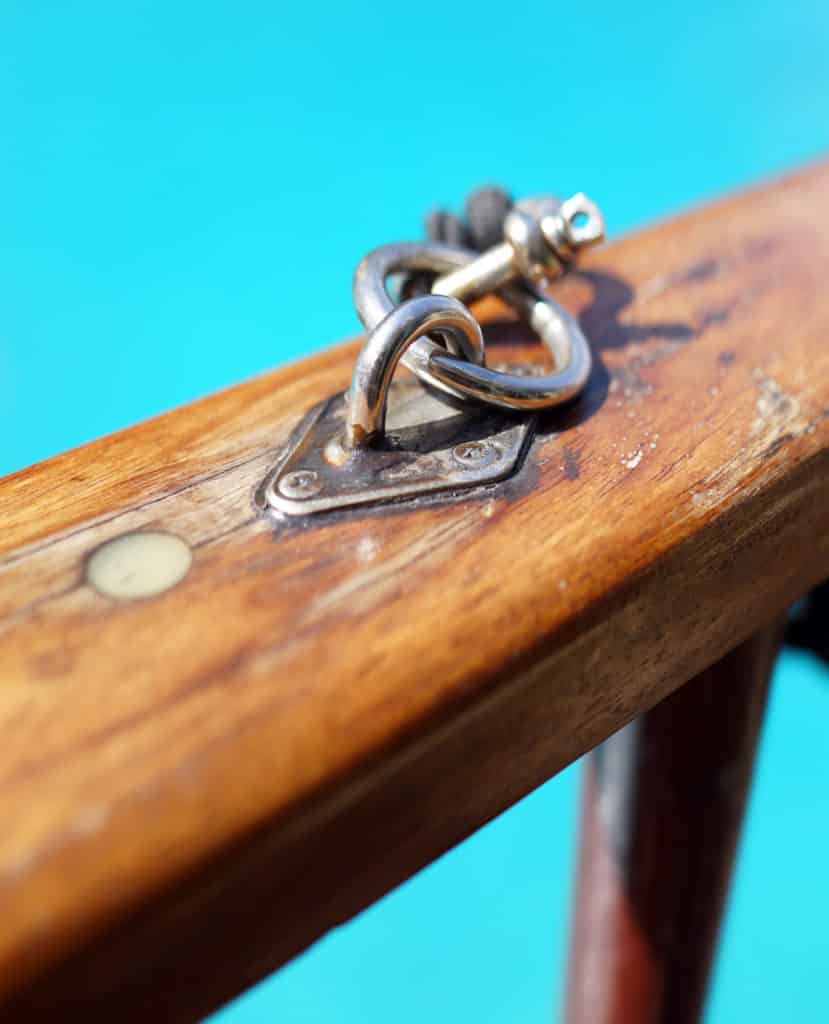 Another theory supports that the owner of the MV Panayiotis, Haris Kompotheklas, transported smuggled cigarettes from the ports of Yugoslavia and Albania in order to send them to Italy. On this particular journey, he was forced to board two Italian smugglers. Rumour has it the captain was able to arrest and imprison the two Italians to exploit the smuggled goods for himself, but because of unexpected bad weather conditions, he was forced to ground the ship in the bay. And while he and his crew ostensibly tried to salvage the cargo, part of it was carried away by the waves, bringing bounty to villagers who then hid the goods. When the authorities got wind of the incident, they came and arrested the captain and his crew, deported the Italians back to their country and convicted the parties for smuggling, while the cargo was sold through an auction.

Recently, the captain of the ship, Kefalonia-born Captain Charalambos Kompothekras–Kotsoros, released the true account of what happened that night.

A stunning island off the southwest coast of Greece, Zakynthos boasts magnificent beaches, secluded coves and verdant valleys. But the island is probably more famous outside Greece for Navagio Beach, a little cove with a pristine beach and crystal clear waters home to a famous shipwreck. In this article, discover the story behind this wayward boat and how it ended up on one of Greece’s most famous beaches.

According to his recollection on the website, the ‘MV Panayiotis (No. 4512 of Piraeus) sailed from the port of Argostoli, Cephalonia to the port of Durrës, Albania on September 6, 1980. When the shipment was ready and set sail for return, during the evening hours of October 2, 1980, the ship ended at the beach of St George near Volimes due to bad weather conditions and mechanical failure. I reported the accident to the authorities, but due to the fact that the beach was not accessible on foot by land, we were not able to protect the ship from thieves and other dangers. As a result, part of the shipment was stolen along with various vessel equipment (radar, VHF radio, etc). I went back to the authorities to report that my property was stolen and the General Prosecutor of the area in my presence organized a formal on-site investigation with the local police. The outcome was outstanding as during the first days of the operation, all stolen items, as well as the stolen part of the shipment, were found in local villages nearby, and 29 persons in total were persecuted and jailed during the following months after the trials were completed.’

After being cleared from all accusations by the court, he was later forced by the authorities to remove the vessel by his own means. When he visited the site to see how he could execute the manoeuvre, he was so astonished by the beauty of the rusting carcass that he decided to leave it as is.
Now the owner of a villa and apartment complex called Monte & Mare in Kefalonia, he is living a more relaxed life in his beautiful homeland.

Whatever rumor or story you believe, there is no doubt that whatever happened that night of October 2nd in 1980 has left a stunning half-manmade, half-natural monument that has put Zakynthos on the worldwide tourist map.